Past Life Therapy for the Fear of Babies and Blood

Demi was an unmarried 35 year old hypnotherapist. She first realised she had a fear of blood as a child when she was sitting opposite a man with his fingers chopped off in a doctors surgery. As she looked at his bleeding hand she stared to feel faint. The actual fainting first started when she was at school and her friends talked about their injuries. The fainting extended to babies and without warning she would faint if she saw anyone give birth on TV. She couldn't visit anyone in a hospital and would faint before she even got in the doorway. If she heard of anyone having an abortion she would faint just thinking about it. 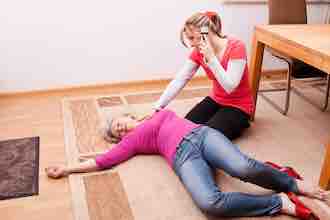 She was a student on my past life regression therapy training and agreed to have regression therapy to resolve the issue. Demi regressed into the past life of a young woman wearing a greyish coat and full length dress with petticoats and underskirts during Victorian times in the UK. In the next scene she was in front of a table with four dirty tools on it. Next she was on the table getting ready for an abortion. At this point Demi started to shake uncontrollably and she was quickly taken through it. Later she was outside lying in the street dying of infection.

Demi was taken through the death and asked to meet the woman who did the abortion and had an intuitive dialogue and express her hurt to the woman. She was then invited to hold the aborted baby and express her sorrow that it had been mutilated. She was forgiven and able to experience the love between the two of them.

Following the session the fear of blood and being with babies was completely resolved. In Demi’s words “I was able to hold my sister's baby in hospital and enjoy the experience and the thought of abortions no longer carries fear for me. I hope my experience might give hope to someone else. There is life beyond fear, even though we might become discouraged and begin to believe that this is not so.”

The client personal information has been changed but not the session details or client feedback. More information about healing from past lives can be found in regression therapy and past life books.

Note that this article is copyright protected but you can link to it if you wish.